Wrap-up from the Gulmarg trip

I hope you scored your share of powder turns this past northern winter. Those who visited Gulmarg with Bill’s Trips certainly did. Once again, good snow conditions were on offer nearly every day of the season, and every trip had epic turns for the majority of their stay. It is very, very hard to find somewhere so reliable for delivering day after day of untracked powder in awesome terrain. Gulmarg did it again!

This blog contains a 2014 winter report, as well as some other bits of info you may find interesting. Bookings are flooding in for 2015, so get in early to secure your preferred dates. 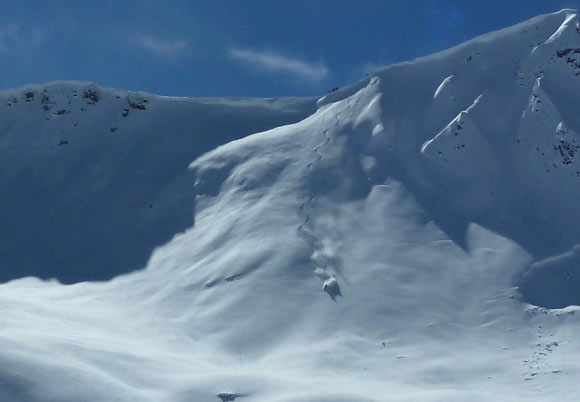 A big thank you and welcome to three new ‘legend’ guides who joined the Bill’s Trips team this winter.

Mark is the chief guide with Harris Mountain’s Heli Ski in New Zealand during the Southern winters, and previously guided for Kashmir Heli Ski in Gulmarg.

Lydia is a lively legend and was the first woman, and only Kiwi to climb Everest without oxygen (and is guiding it for her fourth time as I write this).

Manzoor is a Gulmarg local who is highly respected in the community. The ‘Serpanch’ (elected mayor) of his village, Manzoor previously guided for K-Line before joining our team as an assistant guide.

Bookings are now open for 2015. With many returning guests, some trips are close to half full already. See the dates and prices page for details, and go to the expression of interest page to secure your spot.

During the summer of 2013, the iconic hotel of the Gulmarg plateau was given a major face lift. The refurbishment was done superbly, and our fears of the hotel losing its character were instantly dismissed on arrival. The rooms are now brighter and fresher with stylish new furniture, curtains and flooring, but the classic old world charm has been beautifully retained.

Being the only guide under 40 (just), Sam was elected the social media guy for the season.  Check out some of his regular posts from the winter on our Facebook page.

The Biggest Cheers goes out to all who joined us this season. Myself, Sam, Mark, Mark, Lydia, Wali and Manzoor had an awesome time sharing powder turns and hanging out over après drinks. Yousef loved how you looked in your pherins,  and behaved, (or not) on the houseboat. The Highland Park staff had tears in their eyes when we left. Thanks again for a great winter and we would love to see you back again sometime soon. 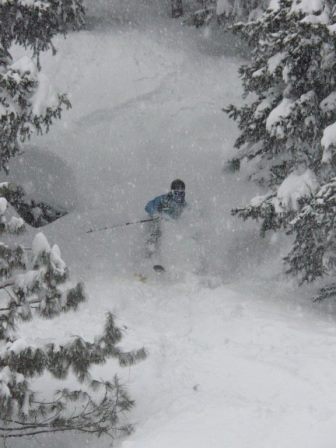 Early January was a little lean on snow. There were plenty of good turns to be had although the base wasn’t great until about the 20th, when a dump arrived which enabled us to ski almost everywhere.  Perfect blue bird days followed for some amazing skiing in the alpine before a big 7 day storm hit at the start of February. Epic deep days were enjoyed in the trees before a week long clear spell with a pristine blanket of fresh on the upper mountain. The 16th to the 19th of Feb saw a few warmer than usual days, but then very regular storms continued to hit until the middle of March. All trips experienced both the alpine and the trees in great conditions.

The base at the hotel reached three meters in early March, and the total snow fall was approximately 7-8 meters in 10 weeks.

Due to a persistent weak layer, the avalanche danger was considerable on many aspects for a prolonged period. This excluded certain terrain from our operating area, although there were always plenty of safe untracked options to choose from.

Colin Mitchell did a great job in a very testing season as the new Snow Safety Officer for Gulmarg. His daily hazard forecasts were very accurate and the mountain was opened efficiently after each storm. It was a particularly difficult (dangerous) snow pack for much of the winter, and although there was one avalanche fatality, there were very few other avalanche involvements.

In late January a European visitor died in an avalanche just outside of the resort boundary. Two parties were skiing on adjacent slopes when an avalanche caused by one party sympathetically released an avalanche on the slope being skied by the other party. One skier was caught and carried for approximately two hundred meters. He was dug out by his guide in a matter of minutes but had succumbed to injuries sustained. Although Bills Trips guests were not skiing in the vicinity, our guides were asked to help with the rescue and evacuation efforts. Our thoughts go out to the family and friends of Arno.
This was only the second skier related avalanche death in Gulmarg since the gondola opened in  2005.

Although Bill’s Trips were fully booked for the peak season, the total number of visitors to Gulmarg was significantly less than the previous two years. There are numerous theories going around as to why, but whatever the reason, it gave us lots more laps of the bowls near the gondola before they were tracked after each storm. Happy days!

After a tough season in 2013 due to permit issues and bad flying weather, it was great to see the helicopters flying whenever they had the chance this winter. Nearly all of our guests did at least one amazing day in the Heli, and some where lucky enough to experience the Heli Touring Day that we offer when the perfect conditions present themselves.

New Base Station for the Gondolal

I expect by next winter the new base station for the gondola (containing a restaurant and shops) will be completed. This season, we stepped over building rubble and inspected welds on the half finished project while walking to, and waiting in line for the Gondola. Classic!

Have a read of what some of our guests had to say about their experience this year.

This trip certainly made an impression on me and will stay engraved in my mind for ever.  I will probably have to come back and stay a bit longer…………….. Helen will make me do it again if nothing else!

Everybody around Bill works with passion and dedication, and have years of experience in their field. We always felt like guests and they played “hosts”.  We certainly never felt like customers.

You could feel that they love that mountain, the country, and could not help themselves but try to share their love for that lifestyle and that part of the world.

As for Bill’s organisation: Unique is the word I would use. From the minute you land he puts you in Kashmiri time and pace, and you immediately feel miles away from your busy Westerner’s lifestyle.  How he managed to attend to everyone’s special needs I still cannot explain. The laid back attitude with total professionalism and attention to details is what struck me as a unique blend. Always underselling and over delivering.

A big thank you to you Bill, and to your amazing team………including the whole dedicated Kashmiri team at the iconic Highland Park Hotel.

Once again, I’d like to thank you for opening the door to Charlie, Morgan and myself to a spectacular fragment of the snow covered world. We had a brilliant time in the Highland Park Hotel and the surrounding slopes, and I know everyone else in the group did too. Of course the location is superb, but you, and your guides, and your flawless organisation were the underpinning of it all. So Bill, thank you again… your Trip was a life changing experience,(in that now I have to repeat it at least a few times.)  I will join Pierre in his threat to load the boards into the ute and visit for a surf before you teleport to the mountains.

All the best,
Rod

I can’t tell you how much I enjoyed the trip…still grinning ear to ear.  EPIC would be an app description… I really enjoyed myself and the whole Kashmiri experience. It was one of the greatest trips I’ve had.  I could spend another 2 weeks……..missing the mountain and snow now that I’m back in the city. Thanks for everything. Really!  Super impressed with your operation and the quality of all the guides.  Tops!  I wish you guys good snow and weather for the next weeks!  Man….bummed just writing this email…I miss the mountain, exhaustion every night, and all that naan and paneer….mmm. Say hello to everyone for me.

I was going to do this as a one off, but after coming on the trip I would love to do it again.   I really appreciate everything that all the guides did in keeping us safe.  I felt very comfortable with the sensible decisions that were made, and during a tough time the guys were absolutely professional (but could still have fun and get us good lines). The houseboat and Dal Lake were just great. Great food, great experience. Loved it.

Thanks Bill, Sam, Mark and Mark, Wali and Manzoor for an awesome experience.

Just loved my time in Kashmir with you! There is nothing I can fault with the trip……the adventure skiing, world-class guiding, Highland Park, good company, Kashmiri culture…….Thanks for looking after me so well. Felt like I was treated like a Queen. Keep a spot for Greg and I to come next year for 1st 2 weeks of Feb. Send my thanks and good cheer to Sam, Lydia, Mark, Mark, Wali and Manzoor.

Back in Mullum trying to get back into the groove, still dreaming of Gulmarg. Had such a wicked time there thanks to you and your homies, What a weird and wonderful place!

Got back to the wilds of Melbourne and now that I’ve said hello to everyone I’d like to be back in Gulmarg. Thanks to you and the other guides for a brilliant trip. We think it was the best one yet and the three of us are pumped to do it again next year. The snow and the trips we did were unbelievable! We will be in contact after our debrief so we can get in early. Enjoy the rest of the season.

I had a fantastic time skiing with you and your team, and I will certainly come back.  There is so much more to do, and I will look forward to bringing my wife and friends next time! Thanks for making it such a great and funny trip.  As Pierre said, there is something really special about the way that you manage to keep things so relaxed, and yet so professional on and off the mountain.  It is a really good recipe and I think your ability to attract and retain such good guides says a lot about you, the company, and Gulmarg itself.  I look forward to coming again. 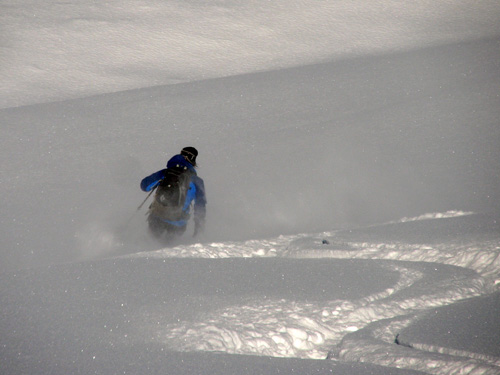 For more information on our skiiing and snowboarding adventures or to make a booking please contact Bills Trips.